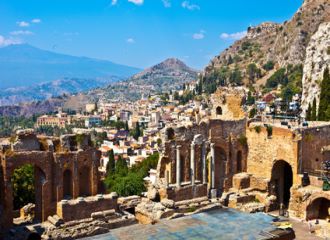 Sicily, commonly known as Sicily, is the largest island in the Mediterranean and is an autonomous region of Italy located right at the tip of the boot. Sicily has 5,048,806 inhabitants (11/2010) and is 25,711 square kilometers in size. Sicily is rich in culture, especially architecture, cuisine, music, literature, music, and art.

Aside from the beautiful beaches, there are a number of things to see, including a number of UNESCO World Heritage sites. This includes the Archaeological Park Valle dei Templi of Agrigento, Villa Romana del Casale of Piazza Armerina, the Aeolian Islands, Syracuse and the Rocky Necropolis of Pantalica, and Late Baroque Towns of the Val di Noto.

Sicily is noted for its cuisine, and is sometimes listed as “God’s Kitchen.” Some of the things that people should try are its cannolis, braccilattes, and arancini. Also, individuals should not forget a slice of Sicilian pizza.

The two main airports in Sicily are in Catania and Palermo. The Catania-Vincenzo Bellini Airport (CTA) is 4.3 kilometers southwest of Catania. This airport is the busiest in the region and the sixth busiest in all of Italy. The other airport is the Sicily Palermo Airport (PMO), which is located 3.5 kilometers northwest of Palermo, the capital city of the region.