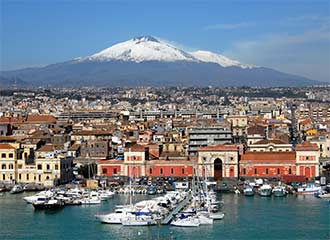 The city of Catania is located along the coast of Sicily, facing the beautiful Ionian Sea. It is the second largest city in the island of Sicily with 296,303 inhabitants (3/2009). Catania stretches for 180.88 square kilometers long the Sicilian coastline. The city rests at the foot of Mount Etna, the largest volcano in all of Europe. It is a major economic and transportation center, known for its busy downtown area and very active nightlife. It is also quite well known for its baroque architecture mixed with urban design.

Because of the numerous volcano eruptions that have occurred in Catania over the last thousands of years, many ancient monuments have been destroyed. However, there are still a number of remains that can be seen today including a Roman era aqueduct and forum and the Greek Acropolis of Montevergine.

Another popular attraction is the baroque-era Piazza del Duomo. This cathedral houses the Elephant Fountain, or “U Liotru,” which has become the symbol of Catania as well as it marks the entrance to the main shopping street in the city, Etnea.

The airport closest to Catania is the Catania-Vincenzo Bellini Airport (CTA). It is approximately four kilometers right outside of the city. It is the busiest airport throughout the island of Sicily and hosts numerous European airlines including British Airways, Lufthansa, Alitalia, EasyJet, Iberia, Luxair, Wizz Air, Wind Jet, and Air Berlin.