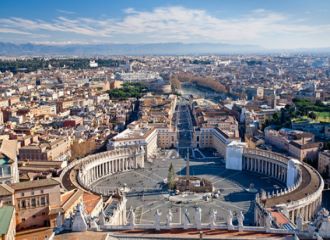 The city of Rome is located in Lazio region – it is not only the Capital of Italy, it is also the largest as well as the most populated city in the entire country. It has a population of 2,761,477 inhabitants (12/2010) and is 1,285.31 square kilometers in size. The history of Rome spans thousands of years as the center of the Roman Kingdom and the Roman Empire. It is the most popular tourist destination in Italy and is listed as a UNESCO World Heritage Site.

The Colosseum and the Vatican Museums are listed in the top 50 most visited tourist destination around the world. There is much to see in the way of centuries-old basilicas and churches, Roman-era ruins, ornate statues, opulent monuments, and beautiful fountains.

Rome is a fashion capital of the world, with many of the top designers in the world stationed here.

Rome will be home to the 2020 Summer Olympics, 60 years after it first hosted the event.

The primary international airport located closest to Rome is the Rome Fiumicino Airport (FCO), which is 26.5 kilometers from the center of Rome. It is the largest airport in Italy and provides services for all major domestic and international airlines. If visitors are flying in from somewhere within Italy, they may land at the Rome Ciampino Airport (CIA), which is only 14.51 kilometers away.