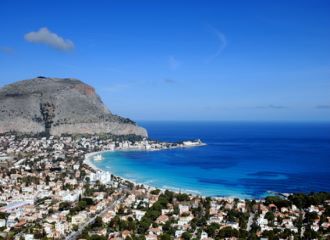 The city of Palermo is the capital of the southern Italian island of Sicily. It is well noted for its architecture, culture, history, and gastronomy. It is the economic, cultural, and tourism capital of Sicily. Visitors come because of the beautiful Mediterranean weather, gorgeous beaches, world renowned cuisine, and the large number of Romanesque, Gothic, and Baroque style palaces, churches, and buildings.

There are a large number of churches in Palermo. The main church is the Palermo Cathedral, which has had a long history of alterations, restorations, and additions; the last one being in the eighteenth century. The San Giovanni degli Eremiti is located by the Palazzo dei Normanni (a grand example of Norman architecture) and is well known for its bright red domes, noting the influence of Arab architecture in Sicily during the twelfth century.

The main airport serving the city of Palermo is the Palermo Airport (PMO), also known as the Punta Raisi Airport and the Falcone-Borsellino Airport. It is approximately 25 kilometers outside the center of Palermo. This airport is considered one of the busiest in all of Italy. It provides services to a number of airlines, including Alitalia, Air Berlin, EasyJet, Iberia, Lufthansa, Ryanair, Wind Jet, and Luxair.