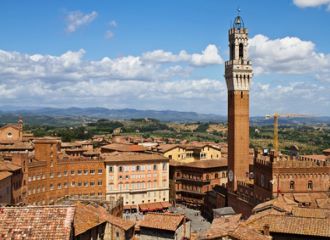 Siena is a city located in the Italian region of Tuscany. The city has 54,526 inhabitants (9/2010) and is 118 square kilometers in size. The historic center of Siena is a UNESCO World Heritage Site and one of the most visited locations in all of Italy. The city itself is well known for its museums, art, cuisine, and the Palio, a horse race that is held twice a year.

There are many important things to see in Siena. There is the Piazza del Campo, the palazzo Pubblico, the Duomo, which is a black and white Romanesque cathedral, and the Palazzo Salimbeni.

There are a number of events in Siena, aside from the horse races, including a number of classical concerts and the summer Siena Jazz Festival.

The closest airport to Siena is the Florence Airport (FLR), also known as the Peretola Airport or the Amerigo Vespucci Airport. It is a rather small airport with only a single runway. The airport is located approximately 55.44 kilometers from the city and one of the two airports that serve the entire Tuscany region. (The other is the Pisa Galileo Galilei Airport (PSA) 85.94 kilometers from Siena.) While it is small, it provides service to numerous airlines around Europe, including Alitalia, Air France, and Lufthansa Regional.