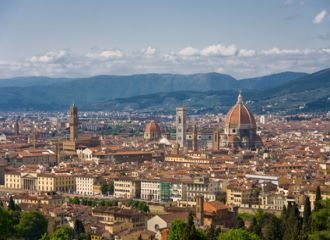 The city of Florence is the capital of the northwestern region of Tuscany. With a population of 370,702 inhabitants (10/2010), it is the most populous city in the entire region. Florence is 102.41 square kilometers in size. Lying along the River Arno, Florence is known for the role it played throughout the Middle Ages and as the birthplace of the Italian Renaissance period, especially in the fields of art and architecture. Florence is a UNESCO World Heritage site and ranked as one of the most beautiful cities in the world by Forbes Magazine.

The Galleria degli Uffizi is one of the most famous fine art museums in the world and houses beautiful collections of Renaissance sculptures and paintings. The Santa Maria del Foire, also called the Duomo di Firenze is the main cathedral of the city as well as the city’s main symbol. It is known for Brunelleschi’s large dome. The Boboli Gardens behind the Pitti palace offer magnificent views of Florence.

Florence is served by the Florence Airport (FLR), also known as the Peretola Airport or the Amerigo Vespucci Airport. It is a rather small airport with only a single runway. It is approximately 15 minutes from Florence’s city center and one of the two airports that serve the entire Tuscany region. While it is small, it provides service to numerous airlines around Europe, including Alitalia, Air France, and Lufthansa Regional.