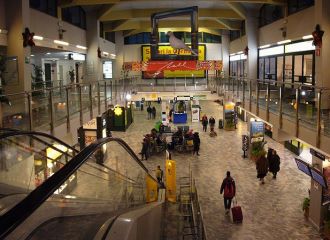 The Pisa Galileo Galilei International Airport (PSA), more commonly known as just the Pisa Airport, is located two kilometers from Pisa’s city center. It is one of the two major airports in the Italian region of Tuscany (the other one is the Peretola Airport, also known as the Amerigo Vespucci Airport in Florence). The airport is named after the famous scientist of the same name who was a Pisa resident. In 2010, The Pisa Galileo Galilei Airport provided services to 4,067,012 passengers. It is listed as one of the busiest airports in all of Italy.

The airport provides its services to a number of airlines, including Air France, Alitalia, British Airways, EasyJet, Iberia, Lufthansa, and Ryanair.

There is a VIP Lounge for those who fly business class at the Pisa Galileo Galilei Airport. It offers a number of amenities, including internet connections, refreshments, television, and newspapers. There are a number of other services offered to all passengers coming and going, including banking services, ATM, post office, chapel, beauty center, hairdresser, restaurants, and shopping opportunities. The ‘La Corte’ in the airport houses around 15 different stores.