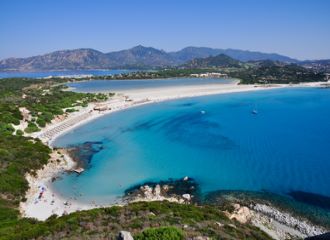 Sardinia is an autonomous region of Italy and the second largest island in the entire Mediterranean Sea. The island has a total population of 1,675,411 inhabitants (1/2011) and is 24,090 square kilometers in size. Some of the main cities in Sardinia include Cagliari, Olbia, Alghero, and Carbonia.

Seafood figures prominently within most of Sardinian cuisine, including squid, lobster, tuna, and sardines.

There are three airports in Sardinia. The Cagliari-Elmas Airport (CAG) is the busiest in the entire island and served by a number of domestic and international flights. Olbia Airport (OLB) is the second busiest airport in Sardinia. It has fewer routes than Cagliari but connects to major countries in Europe. The last airport is the Alghero-Fertilia Airport (AHO), and is a domestic airport for the most part.