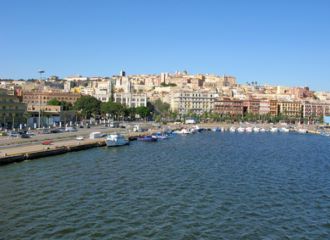 The city of Cagliari is the capital of the Italian island of Sardinia. The city boasts 156,560 inhabitants (11/2010) and stretches for 85.45 square kilometers along the island’s coast. It is the industrial and economic center for Sardinia because it has one of the largest ports in the Mediterranean Sea as well as an international airport.

The old city is located on the top of the hill and offers a beautiful view of the gulf. A number of the city walls are still standing today as well as two white limestone towers built in the thirteenth century. The Basilica of San Saturnino is one of the most important Paleo-Christian monuments throughout the island.

Cagliari is known to many as “The City of the Sun,” because of its numerous beaches. One of the most popular beaches in Caglari is the Poetto Beach. It goes on for eight kilometers and offers rest and relaxation along white sandy beaches and beautiful blue water. Cagliari is also considered the “greenest city in Italy” because of its numerous parks and low levels of smog.

The city of Cagliari is served by the Cagliari-Elmas Airport (CAG). It is an international airport not far from the center of Cagliari. It handles millions of passengers every year from numerous airlines, including Alitalia, Air Berlin, British Airways, Ryanair, and Luxair.