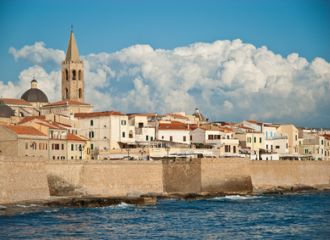 Alghero is a coastal town on the Italian island of Sardinia. It is known for its beautiful beaches and fresh seafood, including Catalan lobster, a lobster salad with raw onions and tomatoes. Sea urchins are also very popular and there is a festival held in their honor during the year. It is also known for its beautiful red coral jewelry and bars that stay open late at night.

The city, which is one of the most popular destinations in Sardinia is approximately 224.43 square kilometers and boasts a population of 43,831 (1/2009).

One of the primary historical sites is the Palazzo d’Albis. Also quite popular is Neptune’s Grotto, which is located at Cappo Caccia. Two of the most important archaeological sites that the island of Sardinia is known for are also located in Alghero – Nuraghe Palmavera and Anghelu Ruju. The city is also known for offering a number of outdoor activities, including scuba diving, mountain biking, climbing, and caving.

Alghero is serviced by the Alghero-Fertilia Airport (AHO). It is the third busiest airport in Sardinia and about 10.5 kilometers from Alghero. Airlines that service his airport include Alitalia and Ryanair. There are a number of buses every hour to take visitors to the city.