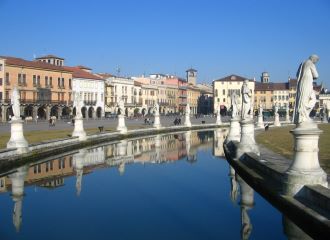 The city of Prato is located in the northern Italian region of Tuscany. The city has a population of 186,710 inhabitants (7/2009) and is 97 square kilometers in size. Prato is known for being heavily into the textile industry and is one of the primary proponents of the slow food movement with a number of local delicacies including a type of biscotti known as cantucci.

Prato is known as the home to a number of cultural monuments and museums, including Filippo Lippi frescos located at the Cathedral of Santo Stefano. There are numerous other beautiful churches in Prato, including the Santa Maria delle Carceri and the Sant’Agostino church.

The city of Prato is served by the Florence Airport (FLR), also known as the Peretola Airport or the Amerigo Vespucci Airport. It is a rather small airport with only a single runway. The airport is located approximately 12.33 kilometers from the city and one of the two airports that serve the entire Tuscany region. (The other is the Pisa Galileo Galilei Airport (PSA) 60.31 kilometers from Prato.) While it is small, it provides service to numerous airlines around Europe, including Alitalia, Air France, and Lufthansa Regional.