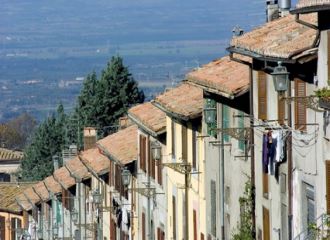 Viterbo is a city located in the western Italian region of Lazio. It is approximately 80 kilometers outside Rome. The city has a population of 63,581 inhabitants and is 406.28 square kilometers in size. Viterbo is known for its wood, marble and pottery. It is also home to the Italian gold reserves.

The historic center of Viterbo is one of the best preserved medieval towns throughout central Italy. A large number of the older buildings, especially churches, are built above ancient ruins. The main attraction is the Palazzo dei Papi, or Papal Palace. There is also the Romanesque-style Cathedral of S. Lorenzo, which was built over a temple to Hercules.

One of the most popular things individuals do while in Viterbo is visit the thermal springs. The most popular one is Bulicame, which is two kilometers outside Viterbo.

The airport closest to Viterbo is the Rome Fiumicino Airport (FCO), known as the Leonardo da Vinci-Fiumicino Airport. It is the largest airport in Italy and located 70.2 kilometers outside the center of Viterbo. The airport services numerous airlines from all over the world, including some of the biggest like Aer Lingus, British Airways, Air Canada, American Airlines, Continental Airlines, Delta Airlines, EasyJet, El Al, Iberia, KLM, and Lufthansa.