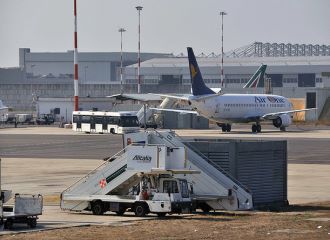 The Rome Fiumicino Airport (FCO), also known as the Leonardo da Vinci-Fiumicino Airport is the largest airport in all of Italy. It is located 35 kilometers from the city center of Rome. In 2010, passenger traffic was at 36,337,523 people. The airport is the primary hub for Alitalia, the primary Italian airlines, and is the sixth busiest airport throughout Europe and the twenty-ninth busiest airport around the world according to 2011 statistics.

The airport services numerous airlines from all over the world, including some of the biggest like Aer Lingus, British Airways, Air Canada, American Airlines, Continental Airlines, Delta Airlines, EasyJet, El Al, Iberia, KLM, and Lufthansa.

Inside the Rome Fiumicino Airport, there are a number of amenities, including great shopping, restaurants, car rental services, and currency exchange.