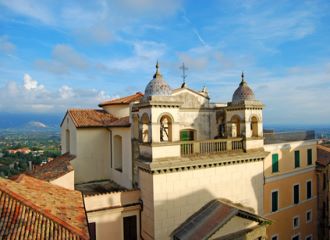 The city of Velletri is located in the western Italian region of Latium. The city has a population of 53,298 inhabitants (4/2010) and is 113 square kilometers in size.

One of the main sights to see in the city is the Oreste Nardini Civic Archeological Museum of Velletri. It contains a number of noteworthy works dating back as far as the protohistoric period all the way to the medieval period. Aside from that, there are remnants of an ancient Roman amphitheater.

There are numerous churches in Velletri, including the Tower of Trivium, the Cathedral of St Clement, and the belltower of Santa Maria.

The airport closest to Velletri is the Rome Fiumicino Airport (FCO), known as the Leonardo da Vinci-Fiumicino Airport. It is the largest airport in Italy and located 46.1 kilometers outside the center of Velletri. The airport services numerous airlines from all over the world, including some of the biggest like Aer Lingus, British Airways, Air Canada, American Airlines, Continental Airlines, Delta Airlines, EasyJet, El Al, Iberia, KLM, and Lufthansa.