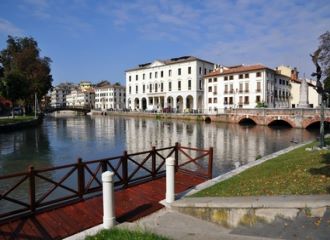 The city of Treviso is located in the northern Italian region of Veneto. The city has a population of 82,854 inhabitants (11/2010) and is 55.5 square kilometers in size. The city is home to the headquarters of some major manufacturers and retailers, including Benetton (clothing), DeLonghi (appliances), and Pinarello (bicycles).

There are a number of important sights to see while in Treviso. There is the Church of San Francesco which was built between 1231and 1270. It is in the late Romanesque – early Gothic style and was used by Napoleon as well as his troops as a stable. There is the fifteenth century Piazza dei Signori, and the thirteenth century Church of San Nicolo. Treviso also has a Cathedral that is dedicated to St Peter.

The airport closest to the city of Treviso is the Venice Marco Polo Airport (VCE). It is 19.94 kilometers from the city. The airport services a number of airlines, including Air Berlin, Alitalia, British Airways, Delta Airlines, EasyJet, Iberia, Lufthansa, US Airways, and WindJet.