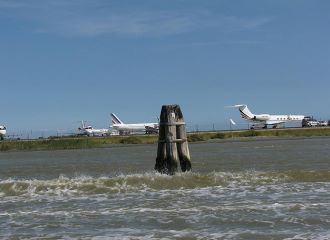 The Venice Airport (VCE), commonly known as the Venice Marco Polo Airport is located eight kilometers north of the city of Venice in the Veneto region of Italy. It was named after the Venetian traveler, Marco Polo. In 2010, the airport offered its services to 6,701,689 passengers flying in and out of the airport. This makes it the fifth largest airport in Italy in terms of its air traffic.

The airport also provides services to a number of cargo airlines, including DHL Aviation, FedEx Express, and UPS Airlines.

The Arrival and Departure levels of the airports offer a number of facilities, including banking services, ATMs, currency exchange centers, wireless internet access, and shops. There is also a Travelex Business Center located in the airport, which offers conference halls and meeting rooms, as well as secretarial support, individual workstations, and translation services.