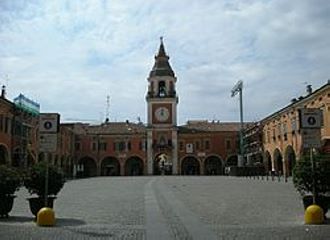 The city of Sassuolo is an important industrial center within the Italian region of Emilia-Romagna. The city boasts a population of 41,573 inhabitants (4/2009) and is 38.56 square kilometers in size.

The Ducal palace of Sassuolo is one of the primary attractions in the city. It was created in 1634 by Bartolomeo Avanzini. French Baroque painter Jean Boulanger painted part of the interior with magnificent frescos between 1638 and 1656.

The closest airport to Sassuolo is the Guglielmo Marconi (Bologna) International Airport (BLQ). It is located 40.32 kilometers from the center of Sassuolo. Ryainair, British Airways, and Turkish air are known to have a few flights a day to Bologna and the airport services a number of international connections, including Amsterdam, Copenhagen, Moscow, Madrid, Paris, and Brussels.