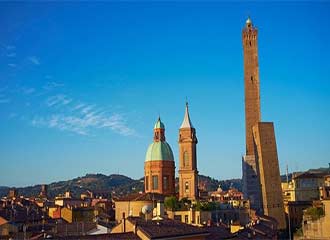 The city of Bologna is the capital of the Emilia-Romagna region in northern Italy. It is the seventh largest city population-wise with 382,460 inhabitants. The city stretches over 140.7 square kilometers of land. Bologna was declared as a European Capital of Culture in 2000 and a UNESCO “City of Music” site in 2006. Today, Bologna is one of the riches cities throughout Italy and a lively cosmopolitan area known for history, art, music, and culture.

The Piazza Maggiore is a large pedestrian area that has numerous churches, buildings, and stores. The Fontana di Nettuno (Fountain of Neptune) is one of the most prominent features of the city. There is also a large variety of museums, including the Gallery of Modern Art of Bologna and the Archeological Museum.

Bologna is considered by many to be the gastronomic capital of Italy. The city is renowned for its amazing culinary tradition and is known for the famous Bolognese sauce, as well as the production of salami, mortadella, prosciutto, and other cured pork meats. There is also a number of well-known vineyards as well.

The closest airport to Bologna is the Guglielmo Marconi (Bologna) International Airport (BLQ). It is just a few quick minutes away from the center of the city. Ryainair, British Airways, and Turkish air are known to have a few flights a day to Bologna and the airport services a number of international connections, including Amsterdam, Copenhagen, Moscow, Madrid, Paris, and Brussels.