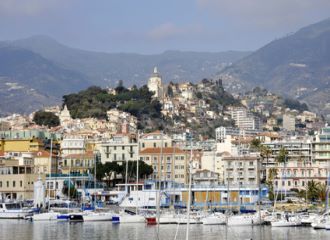 The city of San Remo, also written as Sanremo, is located along the Mediterranean coast in the Italian region of Liguria. It is a popular destination along the Italian Riviera. San Remo has a population of 56,864 inhabitants (4/2009) and is 54.7 square kilometers in size. It has a number of beautiful beaches, hotels, restaurants, and other things that make it a primary tourist destination.

San Remo is known for its San Remo Casino. It is considered an architectural masterpiece and is home to the Italian Poker Tour. It has long been said that the city is the birthplace of telesina, a variation on five-card stud.

Every year, the Ariston Theater hosts the San Remo Music Festival, which has been held since 1951. This festival is what inspired the Eurovision Song Contest. Because the festival is so popular in Italy, it is just known as “Il Festival.”

The closest airport to San Remo is the Genoa Cristoforo Colombo Airport (GOA), which is approximately 109.37 kilometers from the city center. It offers its services to a number of airlines, including Air France, Alitalia, British Airways, Ryanair, Turkish Airlines, Lufthansa, and Iberia.