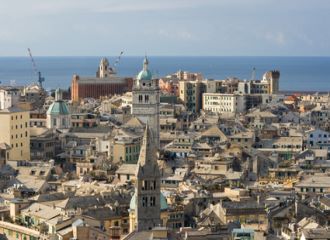 The city of Genova is an important northern Italian seaport located in the Liguria region. The city boasts a population of 607,771 (10/2010) and is 243.60 square kilometers in size. It was made an EU Capital of Culture in 2004 because of its vibrant history, architecture, music, art, and gastronomy.

Genova is known as the birthplace of pesto sauce and is therefore in a large number of dishes throughout the city.

There are numerous things to see in Genova. The Old Harbor is part of the city’s ancient port. There are a number of historical buildings and landmarks, including the Museum of the Sea. There is the St. Lawrence Cathedral that is in a Renaissance-Romanesque style. There are numerous remaining remnants of defensive walls that were build around Genova and are quite a sight to see.

The city of Genova is a popular destination for shopping as there are a large number of designer boutiques, shopping centers, and shopping districts that sell everything from high end designers to independent clothing.

The closest airport to Genova is the Genoa Cristoforo Colombo Airport (GOA), which is approximately eight kilometers from the city center. It offers its services to a number of airlines, including Air France, Alitalia, British Airways, Ryanair, Turkish Airlines, Lufthansa, and Iberia.