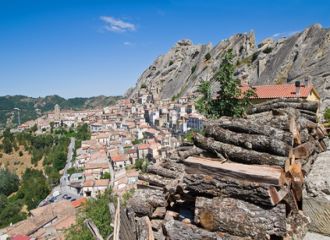 Potenza is a city located in the southern Italian region of Basilicata. It is the highest regional capital in all of Italy and overlooks the Basento River. It has 68,608 inhabitants and is 173 square kilometers in size.

One of the main sights to see is the Duomo of San Gerardo, which was renovated sometime during the eighteenth century but still has parts of the original structure built during the twelfth century. Other things to see while in Potenza include the Church of San Francesco, which was built in 1274, remnants of the Torre Guevara, an old castle that now houses art exhibitions, and the ruins of an old Roman villa along the Poggio Tre Galli quarter of Potenza.

Potenza is serviced by the Bari “Karol Wojtyla” Airport (BRI). It is approximately 97 kilometers from the center of the city. It offers service to a number of popular European airlines, including Alitalia, EasyJet, British Airways, Helvetic Airways, and Lufthansa Regional.