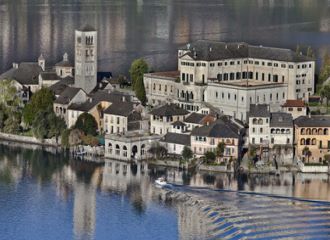 Novara is a city located in the northern Italian region of Piedmont. With a population of 105,024 inhabitants (12/2010), it is the second biggest city, population-wise in the region after Turin. The city is 103 square kilometers in size. Novara is known for being a crucial crossroads for all sorts of commercial traffic from Turin to Milan and Genoa to Switzerland.

The majority of sights in Novara can be found in the city’s historic center. The Basilica of San Gaudenzio is one of the main locations in the city. It was built in 1888 and has a cupola that is 121 meters high. The Novara Cathedral, built in the neo-classical style, is also located here as well as the Piazza Martini Liberta, the largest square in the city.

Novara celebrates a number of events and festivals. On January 22, there is the Feast of San Gaudenzio, the patron saint of the city. Starting in 2001, the Giovani Espressioni (“Young Expressions) has been hosted by Novara. It is a music festival for young musicians.

The airport closest to Novara is the Milano Malpensa Airport (MXP). It is the largest airport in Milan and approximately 22.84 kilometers from the center. Because it is a popular airport, it hosts over 20 different airlines that fly in from Europe, Africa, Asia, and the United States, including Alitalia, Lufthansa, British Airways, American Airlines, Easy Jet, El Al, Iberia, KLM, and Continental Airlines.