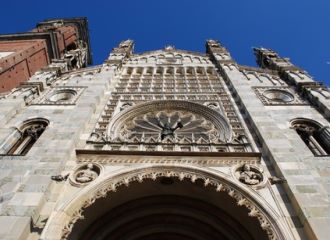 Monza is a small city located in the northern Italian region of Lombardy. It is approximately 15 kilometers from Milan and is known for the Autodromo Nazionale Monza and the Grand Prix motor racing circuit. The city houses a population of 121,466 inhabitants (4/2009) and is 33.03 square kilometers in size.

One of the most notable locations in Monza is Monza Park. It is part of the Royal Palace and is a major historic park throughout Europe. The Royal Villa is the most prominent monument throughout the city. It was built as a symbol of magnificence and luxury of the Habsburg court. Another location that Monza is quite well known for is the Duomo of St John, which is Romanesque-Gothic.

The city of Monza is serviced by the Linate Airport (LIN) and is one of the three major airports located in Milan along with the Milano Malpensa Airport (MXP) (42 kilometers away) and the Orio al Serio Airport (BGY) (35 kilometers away). The Linate Airport is 15.28 kilometers from the city center and is mainly used for domestic and short international flights. Some of the airlines servicing this airport include Aer Lingus, Alitalia, British Airways, Iberia, KLM, Lufthansa, EasyJet.