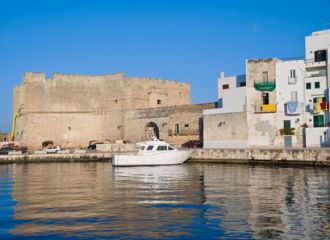 The town of Monopoli is located along the eastern coast of Italy, in the Apulia region. It has a population of 49,591 inhabitants (5/2007) and is 156 square kilometers in size. It lies about 40 kilometers southeast from the city of Bari. Monopoli is an old fishing village that contains some of the most picturesque beaches. Compared to the western coast of Italy, the town is still able to hold onto the “old town” feeling and remains largely untouched by tourism.

One of the main sights to see in Monopoli is the Castle of Charles V. It was completed in 1522 and has a pentagonal shape to it. It was enlarged and restored during the seventeenth century. It was used as a jail from the early part of the nineteenth century until the year 1969. Today it houses a number of art exhibitions as well as cultural events. Another castle is the Coastal Castle of St. Stephen. It was built by Norman Lord Godfrey of Conversano in the year 1086. It was later transformed into a Benedictine monastery.

Monopoli is serviced by the Bari “Karol Wojtyla” Airport (BRI), also known as the Palese Airport. It is approximately 48.8 kilometers from the center of the town. It offers service to a number of popular European airlines, including Alitalia, EasyJet, British Airways, Helvetic Airways, and Lufthansa Regional.