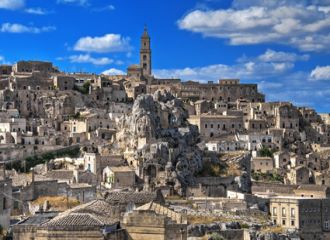 Matera is a large town located in the southern Italian region of Basilicata. It houses a population of 60,310 inhabitants (6/2008) and is 387.4 square kilometers in size.

The town of Matera is most known around the world for its ancient town, known as the “Sassi di Matera” or the “Stones of Matera,” the Sassi for short. The Sassi originates from a troglodyte “(prehistoric) settlement and is suspected to be one of the very first human settlements in Italy. People continued to live in the Sassi for numerous generations and today there are a number of hotels, businesses, and pubs.

There are a number of churches and monasteries within the town’s borders, including the Matera Cathedral, the San Pietro Caveoso church, and the San Pietro Barisano church.

Matera hosts the Women’s Fiction Festival held in late September every year. It tends to attract an international contingent of editors, writers, and literary agents.

Matera is serviced by the Bari “Karol Wojtyla” Airport (BRI). It is approximately 53.98 kilometers from the center of the town. It offers service to a number of popular European airlines, including Alitalia, EasyJet, British Airways, Helvetic Airways, and Lufthansa Regional.