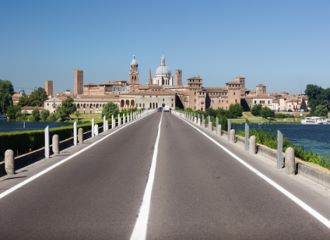 Mantova, sometimes spelled as Mantua) is a city in the northern Italian district of Lombardy. It has a population of 48,353 inhabitants (6/2009) and is 63.97 square kilometers in size. During the Renaissance era, Mantova was considered to be one of the most important cultural cities throughout Italy. Today it still maintains a number of buildings that made the city popular in that day.

Il Palazzo Ducale is one of the most popular attractions in Mantova. It is a complex showcasing medieval as well as Renaissance artistry and architecture. There is also the Basilica Di Sant’Andrea, a world famous church built in 1472 by Leon Battista Alberti, a founder of the Renaissance architectural movement.

Since the year 1997, Mantova has been the home of the Festivaletteratura. This is one of the most well-known literary events to take place in all of Europe. It last for five days and hosts lectures by famous authors from all around the world.

One of the closest airports to Mantova is the Verona Airport (VRN), which is also known as the Valerio Catullo Villafranca Airport. It is located approximately 28.54 kilometers from Mantova. This airport hosts a number of airlines from all around Europe, including Air Berlin, Air France, Alitalia, British Airways, Easy Jet, Israir Airlines, Lufthansa Regional, Ryanair, and Windjet.