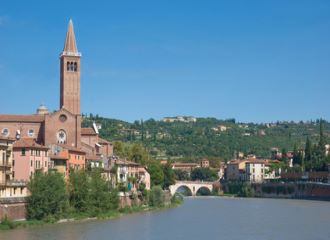 The city of Verona is located in the northern Italian region of Veneto. The city has a population of 265,410 inhabitants (12/2008) and is 206.63 square kilometers in size. It is one of the primary tourist destinations in Italy, known for its amazing artistic heritage, operas, attractions, and yearly fairs. The city is also well known for being the setting of one of William Shakespeare’s most popular pieces of work, “Romeo and Juliet.”

One of the most well known sights in all of Verona is the Roman amphitheater, the Arena, which is found in the Piazza Bra, the largest in the city. It was built around 30 AD and is the third largest after the Colosseum and the Capua. There is also a number of Roman monuments around the city of Verona, including the Roman theater of Verona, built in the first century BC. The Acro dei Gavi, the Gavi Arch, is another Roman edifice built in the first century AD.

One of the closest airports to Verona is the Verona Airport (VRN), which is also known as the Valerio Catullo Villafranca Airport. It is located approximately 9.54 kilometers from the city center. This airport hosts a number of airlines from all around Europe, including Air Berlin, Air France, Alitalia, British Airways, Easy Jet, Israir Airlines, Lufthansa Regional, Ryanair, and Windjet.