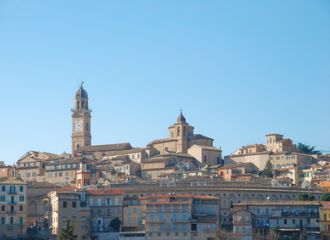 Macerata is a city located in the Italian region of Marche. It is a historical city that is located between the Potenza and Chienti rivers. The city of Macerata has a population of 43,062 people (4/2009) and is 92.73 square kilometers in size.

The city of Macerata holds the Sferisterio Opera Festival every July and August at the Arena Sferistero. It started in 1921 and played in 1922 but then did not start up again until 1967. It features nineteenth century and twentieth century operas.

Right in the center of Macerata is the Piazza della Liberta. At this piazza is the Loggia dei Mercanti that has two-tiered arcades which date back to the Renaissance period. There are a number of palazzos in the area, including Palazzo dei Diamanti and the Palazzo Ricci. In the southern area of the city is the San Claudio al Chienti – a Romanesque church that has quite an unusual shape because it was one church that was built atop of another one.

The airport closest to Macerata is the Perugia Airport (PEG), also known as the Umbria International Airport and the San Franceso d’Assisi Airport. It is approximately 78.5 kilometers from the city of Macerata. It is a smaller airport that services three airlines – Belle Air, Ryanair, and Skybridge AirOps.