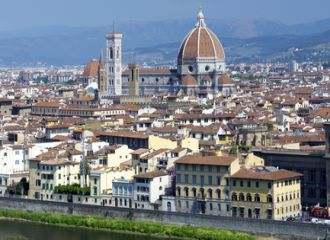 Livorno is a beautiful port city located along the Tyrrhenian Sea in the Italian region of Tuscany. It has a population of 160,931 inhabitants (12/2009) and is 104.8 square kilometers in size. Politically speaking, the city of Livorno is one of the most leftist cities in Italy. In fact the Communist Part of Italy was established in the city in 1921.

There is the Museo Mascagnano, which houses a number of documents, operas, and other memorabilia from Pietro Mascagni, a great composer. There is the Sanctuary of Montenero, dedicated to Our Lady of Graces, who is the patron saint of Tuscany. Many pilgrims go there during their pilgrimage. One last important monument is the Fortezza Nuova. It is a red-brick fortress that, during the Medici times, defended Livorno from pirates.

The primary airport servicing Livorno is the Pisa Galileo Galilei Airport (PSA). It is located 16.88 kilometers from the center of Livorno. It is one of the two major airports in the Italian region of Tuscany (the other is the Peretola Airport, also known as the Amerigo Vespucci Airport in Florence (FLR), which is 77.43 kilometers from Livorno). The airport provides its services to a number of airlines, including Air France, Alitalia, British Airways, EasyJet, Iberia, Lufthansa, and Ryanair.