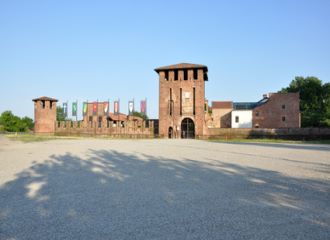 Legnano is a small Italian town located in the northern Italian region of Lombardy. It is approximately 20 kilometers from the popular city of Milan. There is 58,013 inhabitants (3/2009) living in Legnano. The town is only 17 square kilometers in size. Because of the very historic Battle of Legnano fought in 1176 between the Holy Roman Empire and the Lombard League, it is the only town in Italy (aside from Rome) that is named in Italy’s national anthem. To commemorate this battle, the town holds a Palio delle Contrade.

One of the main sights is the Basilica of San Magno. It was built in the early part of the sixteenth century. In the Piazza Monumento, there is a monument to Alberto da Giussano, a legendary Geulph warrior in the Lombard league during the twelfth century.

The main administrative offices for Italian fashion house Dolce and Gabbana are located in Legnano.

The airport closest to the town of Legnano is the Milano Malpensa Airport (MXP). It is the largest airport in Milan and approximately 14.5 kilometers from the center of the town. Because it is a popular airport, it hosts over 20 different airlines that fly in from Europe, Africa, Asia, and the United States, including Alitalia, Lufthansa, British Airways, American Airlines, Easy Jet, El Al, Iberia, KLM, and Continental Airlines.