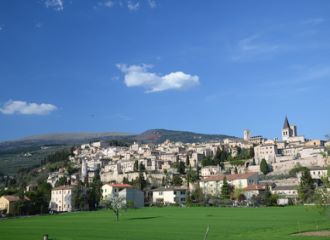 Foligno is a town located in the Italian region of Umbria. It has 56,688 inhabitants (5/2008) and is 263 square kilometers in size. The town of Foligno is one of the most industrialized centers in the region as well as an important rail center. Foligno’s extremely modern appearance is due to Allied bombing during World War II as numerous buildings were destroyed.

While the Palazzo Comunale, the Town Hall, has been rebuilt numerous times, the bell tower still stands from the original thirteenth century structure. There is the Romanesque Cathedral of San Feliciano and also the oldest church in all of Foligno – the Church of S. Maria Infra Portas. Trinci Palace houses the town’s picture gallery, archaeological museum, and the Civic Museum.

The airport closest to Foligno is the Perugia Airport (PEG), also known as the Umbria International Airport and the San Franceso d’Assisi Airport. It is approximately 22 kilometers from the town of Foligno. It is a smaller airport that services three airlines – Belle Air, Ryanair, and Skybridge AirOps.