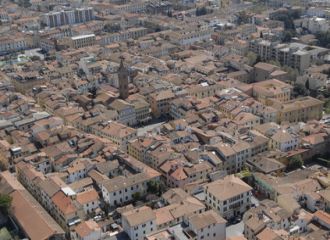 The town of Empoli is located in the region of Tuscany and about 20 kilometers directly southwest of the city of Florence. Empoli sits on the main railway between Pisa and Florence and has been long known for being a primary agricultural center in the area. There are 47,320 inhabitants (4/2009) in Empoli and the town stretches across 62.28 square kilometers of land.

One of the major sites to see is the Piazza Farinata degli Uberti, also known as the Lions Square (of Piazza dei Leoni). The Collegiata di Sant’Andrea is here, which is the main monument for the city. Another location is the Palazzo Ghibellino. It is the former palace of Guidi counts and was built sometime during the eleventh century. However, it was restored at some point in the sixteenth century and little of the original structure can be seen now.

The town of Empoli is served by the Florence Airport (FLR), also known as the Peretola Airport or the Amerigo Vespucci Airport. It is a rather small airport with only a single runway. The airport is 23.54 kilometers from the center of the town. While the airport is considered rather small, it provides service to numerous airlines around Europe, including Alitalia, Air France, and Lufthansa Regional.