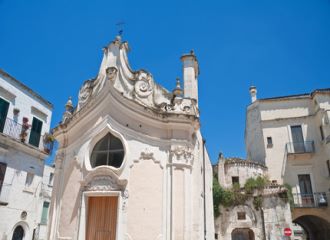 Altamura is a town located in southern Italy in the Bari province. It has 69,728 inhabitants (4/2011) and is approximately 427 square kilometers. The town is around 45 kilometers away from the city of Bari and the Mediterranean coastline.

One of the things this town is most well known for is the Altamura Man, a very well-preserved 400,000 year old skeleton from the pre-Neanderthalian hominid. It was discovered in a limestone cave not far from the town center. The town is also known for their amazing bread that comes anywhere from a small loaf to loaf that is the size of an average car wheel!

The Altamura Cathedral, which dates back to 1232, was created by Emperor Frederick II, who dedicated this spectacular church to the Virgin Mary. It is made in the traditional Gothic style of that time. The Alta Murgia National Park, which is one of the most important protected natural areas throughout the Puglia region, is also located here.

Altamura is serviced by the Bari “Karol Wojtyla” Airport (BRI). It is a bit over 40 kilometers from the city and is a port for a number of airlines, including Alitalia, Lufthansa, Ryanair, and EasyJet.