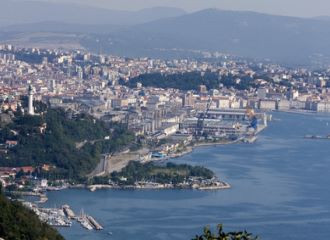 The city of Trieste is a seaport located in the northeastern Italian region of Friuli-Venezia Giulia. The city is actually the capital of this region. It has a population of 205,374 inhabitants (4/2009) and is 84 square kilometers in size. The city shares borders with the Adriatic Sea and Slovenia. Because of its location, it has numerous types of architecture, including Roman architecture and Austrian empire inspired architecture.

One of the main sights to see in Trieste is the Miramar Castle, which was built between the years of 1856 and 1860. The gardens are beautiful and feature two magnificent ponds. There is also a number of archeological remnants spread throughout the city, including the Arch of Riccardo, the Basilica Forense (from the second century), a Palaeochristian basilica, and a few Roman age temples dedicated to Zeus and Athena. As well, there is a Roman theater on the San Giusto Hill that faces the sea.

The airport closest to Trieste is the Friuli Venezia Giulia Airport (TRS), also known as the Ronchi dei Legionari Airport or the Trieste Airport. The airport is located 31.08 kilometers from Trieste. It handles a small number of airlines, including Alitalia, Belle Air, Lufthansa Regional, and Ryaniar.