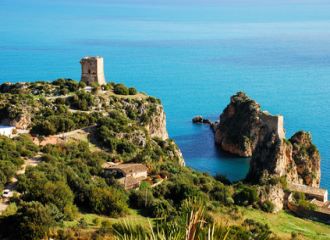 The city of Trapani is located along the western coast of the autonomous island of Italy, Sicily. It remains a very important fishing port as well as the primary gateway to the Egadi Islands, which are nearby. The city boasts a population of 70,638 inhabitants (1/2008) and is 271 square kilometers in size.

The city is well known for its traditions and activities during Holy Week, especially Easter, finishing off with the Processione dei Misteri di Trapani. It is one of the oldest religious events throughout Europe that is continuously running today.

Most of the sights to see in Trapani are located in its old city. Many of the historic buildings throughout the city are Baroque-style. Some of the noteworthy buildings include the Church of Sant’Agostino, Fontana di Tritone, the Trapani Cathedral, and the Basilica of Maria Santissima Annunziata.

There are a number of beaches that run along the coast of the city. One of the best beaches is at Marausa, which is approximately nine kilometers from the city toward the south.

The closest airport to Trapani is the Trapani-Birgi Airport (TPS), also known as the Vincenzo Florio Airport. It is located 12.64 kilometers of the city center. Aside from being a civil airport, it is also utilized for military purposes. It is a smaller airport that services only three airlines, Air One, Meridiana Air, Ryanair.