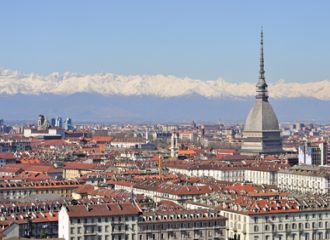 The city of Torino, also known as Turin, was the location of the 2006 Winter Olympics because of its beautiful snow-covered mountains in the Italian northern region of Piedmont. The city boasts a population of 910,188 inhabitants (4/2009) and is 130.17 square kilometers in size. Torino was named the very first capital of a modern Italy (even though eventually the title went to Rome). Torino is home to the well known Shroud of Turin, amazing skiing opportunities, and the home of the Slow Food Movement.

Most of Torino’s attractions include a number of Baroque-style churches and palaces and amazing museums. The Mole Antonelliana is the landmark building of Torino and is considered the highest work of masonry throughout Europe. Museums include the National Cinema Museum, the Egyptian Museum, and the Museo dell’Automobile. The Cathedral of Saint John the Baptist is where the well known Shroud of Turin is located. There is also the Palazzo Madama and the palazzo Carignano.

The airport closest to Torino is the Turin Airport (TRN), also known as the Turin-Caselle Airport. It is located 16 kilometers north of the city center. It services a number of airlines, including Alitalia, British Airways, Iberia, Lufthansa, Ryanair, and WindJet.