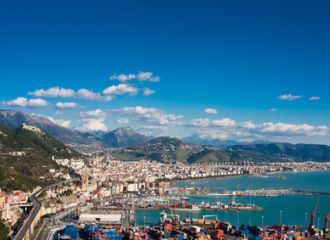 The city of Salerno is located in the southern Italian region of Campania. It has a population of 139,579 inhabitants (7/2010) and is 58 square kilometers in size. It lays right on the coast of the Gulf of Salerno in the Tyrrhenian Sea. It is an important cultural center in the region and is divided into three very distinct regions – a medieval sector, a nineteenth century district, and a post-war area, which is the most densely populated.

Salerno is located in a triangle named “Tourist Triangle of the 3 P” (because the corners lie in Postiano, Paestum, and Pompei). Therefore, it has numerous points of interest for tourists. There is the Lungomare Trieste promenade, which was created in the 1950s and is one of the nicest in all of Italy. There is also the Castello di Arechi, a beautiful castle that today houses congress rooms and exhibitions. There is also numerous churches, including the Salerno Cathedral.

The closest airport to Salerno is the Naples Airport (NAP), also known as the Capodichino Airport. The airport is 49.79 kilometers from the center of Salerno. Airlines that are serviced here include Air Berlin, Air France, Alitalia, British Airways, EasyJet, Air One, Lufthansa Regional, Turkish Airlines and Wizz Air.