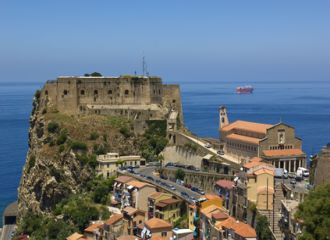 Reggio Calabria, also known as Reggio di Calabria, is the largest city in the southern Italian region of Calabria as well as the most populated. The city boasts a population of 186,547 inhabitants (6/2009) and is 236 square kilometers in size. Reggio Calabria is known for being on the “toe” of the Italian “boot,” or peninsula,” and is separated from Sicily only by the Strait of Messina. It is the oldest city in the region and the second oldest city in all of Italy.

The Lungomare Falcomata is a beautiful seaside promenade in the downtown city and is beautiful to walk around, especially during the summer. Combined with the beautiful beaches, it is the symbol of Reggio Calabria’s summer.

The Cathedral of Reggio Calabria is the largest religious building of its type in the region. There is the Aragonese Castle, which is home to a number of art exhibitions, and the ancient city walls which can still be seen today are a shining example of original Greek architecture. There is also remnants of Roman baths, which are interesting to see.

Reggio Calabria is served by the Reggio Calabria “Tito Minniti” Airport (REG). It is also known as the Aeroporto dello Stretto. It is 4.45 kilometers from the center of the city. There are only a few airlines that fly in and out and only domestic flights. The airlines are Air Malta, Alitalia, Blue-Express, and Trawel Fly.