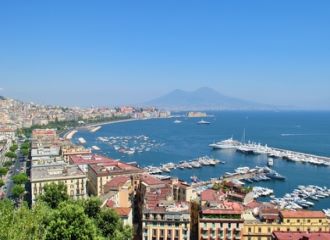 Pozzuoli is a beautiful coastal town in the southwestern region of Campania. It is a great place to go to see some ancient Roman remnants and enjoy some time sitting by the coast. It boasts a population of 83,398 inhabitants (4/2009) and is 43 square kilometers in size.

The main attraction the city of Pozzuoli is known for is the Macellum of Pozzuoli, also capped the Temple of Serapis, or serapeum. It is considered the primary symbol for this city. While called a temple, it was actually considered to be a marketplace. There are three large columns that stand by the center. Other interesting sights include the Flavian Amphitheater, one of the largest in Italy, and the Sanctuary of San Gennaro, which is one of the places where the possibly miracle of the liquefaction of the blood of the saint occurred.

Lake Avernus, which is located in Pozzuoli, is where Virgil placed the entranceway into Hell in the sixth book of the Aeneid.

The closest airport to Pozzuoli is the Naples Airport (NAP), also known as the Capodichino Airport. The airport is 16.77 kilometers from the center of Pozzuoli. Airlines that are serviced here include Air Berlin, Air France, Alitalia, British Airways, EasyJet, Air One, Lufthansa Regional, Turkish Airlines and Wizz Air.