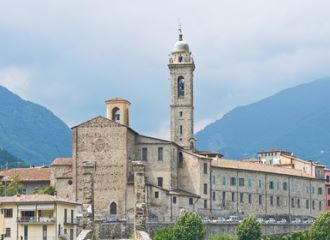 Piacenza is a city located in the northern Italian region of Emilia-Romagna. The city has a population of 102,871 (2/2010) and is 118.46 kilometers in size. The city is known for its production of salted and seasoned pork products, including pancetta, coppa, and salame. One of the culinary specialties in Piacenza is mostarda di frutta – preserved fruits in a sugar-based syrup that has been flavored with mustard. The hills that surround the city are recognized for the vineyards.

There are a number of historical palaces located throughout Piacenza, including the Palazzo Comunale, which is the seat of the local government and one of the best examples to date of medieval civic building, the Palazzo Farnese, and the Palazzo Landi.

Other areas of interest include the Piazza Cavalli, which is the city’s main square, the Duomo di Piacenza, the main cathedral in the city, and the Basilica of Sant’Antonio, which is an amazing example of Romanesque architecture.

Piacenza is serviced by the Linate Airport (LIN) and is one of the three major airports located in Milan along with the Milano Malpensa Airport (MXP) and the Orio al Serio Airport (BGY). The Linate Airport is 55.28 kilometers from the center of Piacenza and is mainly used for domestic and short international flights. Some of the airlines servicing this airport include Aer Lingus, Alitalia, British Airways, Iberia, KLM, Lufthansa, EasyJet.