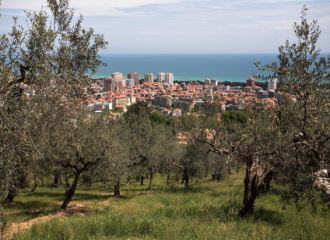 The city of Pescara is located along the coast of the Italian region of Abruzzo. It is the most populated city in the region, with 123,103 inhabitants (3/2009). The city is 33.6 square kilometers in size and known for its seaside resorts along the Adriatic coast, especially during the summer months.

The main sights to see are in the historic center of the city. There is the Cathedral of St Cettus and the birthplace of Gabriele D’Annunzio, a famous poet. There is the Palazzo del Governo, which houses the provincial library, and there is also the Museum of the Abruzzi people.

The primary commercial street in Pescara is Corso Umberto I. It forms a rectangle with Via Nicola Fabrizi and Corso Vittorio Emanuele II to form the main shopping district in the city. This is where all the major stores and boutiques are located.

During the summer months, Pescara is one big non-stop party along the beach. There are numerous discos and clubs.

In July, the city hosts the International Jazz Festival, one of the most renowned jazz festivals throughout Europe.

The Abruzzo Airport (PSR), also known as the Pescara Airport is located approximately four kilometers outside of Pescara’s city center. It is the only international airport in the entire region of Abruzzo. Airlines that services this airport includes Alitalia, Ryanair, Belle Air, and Air Vallee.