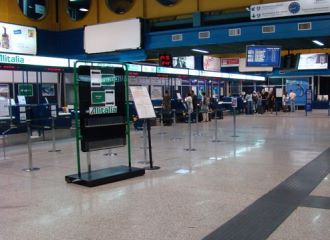 The Lamezia Terme Airport (SUF) that is located three kilometers from the city of Lamezia Terme in the southern Italian region of Calabria. It is considered the most important airport in the entire region and is always under development. This airport is equipped to handle approximately two million passengers for year.

There are 39 destinations throughout 12 countries that are serviced by the Lamezia Terme Airport, with flights to and from Germany being the most popular. Airlines that fly in and out of the airport include Alitalia, EasyJet, Ryanair, Helvetic Airlines, and Swiss Airlines.

While the airport has recently undergone reconstruction, there are future plans in the works to upgrade the airport much more, including lengthening runways.

The airport is equipped with a number of amenities for travelers, including a VIP lounge, business center, ATMs, banks, tourist information office, as well as shopping and dining opportunities.