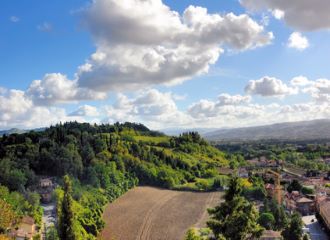 The city of Forli resides in the Italian northern region of Emilia-Romagna. Forli is known as an agricultural center as well as host to a number of artistically and culturally significant landmarks within Italy. The city has a population of 116,864 inhabitants (4/2009) and spreads over 228 square kilometers of land.

The Piazza Aurelio Saffi sits at the center of the city and has a statue of Aurelio Saffi, an Italian politician and important person in the Risorgimento movement. In the piazza, there is the Abbey of San Mercuriale, the primary religious building in Forli. There are also a number of parks in Forli, including the Parcdo di Via Dragoni and the Parco della Resistenza.

Forli is served by the Forli Airport (FRL), which is also known as the Luigi Rifolfi Airport, named after a noted Italian aviator. It is a small airport that contains a single runway. Wizz Air is the largest operator at this airport. It used to service Ryanair and Wind Jet, but these two airline operators moved to other airports in the region.