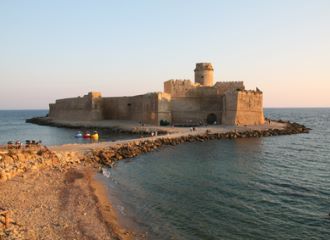 The city of Crotone is located in southern Italy, in the Calabria region. It has 61,853 inhabitants (7/2007) and is 179.8 square kilometers in size. The city was established around 710 BC as an Achaean colony called Croton. It was an important colonial settlement and housed a school of medicine that was very well known throughout the classical world.

The Cathedral in Crotone is one of the primary sites to see. It was originally built between the ninth and eleventh century but much of it has been rebuilt until today. There is a neo-Classical façade as well as Baroque decorations along the nave. There is also the Castle of Charles V. Built during the sixteenth century, this castle is home to the Town Museum, which holds artifacts from the ancient city of Croton.

The airport serving the city of Crotone is the Crotone Airport (CRV) or the Sant’Anna Airport (Aeroporto di Santa Anna-Crotone). It is ten kilometers from the city center and hosts a few airlines, including Alitalia, Darwin Airline, and Meridiana Fly.