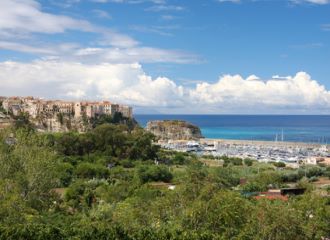 Cosenza is a beautiful city in Italy’s southern region of Calabria. It has a population of 69,603 inhabitants (4/2009) and is 37 square kilometers in size. Because of Cosenza’s cultural past, it is often regarded as the “Athens of Calabria,” and today this city remains a hub for culture, with a large number of libraries, theaters, museums, and universities.

One of the main sites is the Church of San Domenico, which was built in the mid fifteenth century, combines Medieval and Renaissance elements. The Open Air Museum houses a large variety of modern art sculptures in the street. The Church of Sant’Agostino, also known as the Spirito Santo was built by the Augustinians in 1507 and is another beautiful sight to see.

In October, Cosenza hosts both the Festa del Cioccolato (Chocolate Festival) and the La Sagra dell’uva e del Vino (Wine Festival). In March there is the S. Giuseppe Rock Festival.

The closest airport to Cosenza is the Lamezia Terme Airport (SUF). It is 45 kilometers from the city. It is the most utilized airport in the entire region of Calabria and always under development. Some airlines that it services include Alitalia, Ryanair, EasyJet, Helvetic Airways, and Air Italy.