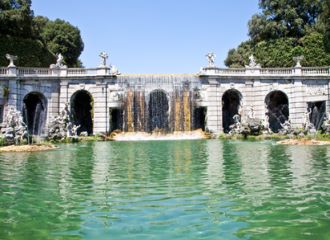 The city of Caserta is located in Italy’s southern region of Campania. It is known as being a very important city in terms of agriculture as well as commercial and industrial business.

The city is best known for the Palace of Caserta – the largest palace (as well as building) built in Europe throughout the eighteenth century. It is a UNESCO World Heritage Site. It was created by Luigi Vanvitelli, an Italian architect for the Bourbon kings of Sicily and Naples. There are over 1,200 rooms and has been the set for movies like Mission Impossible III and Star Wars. There is an adjacent park that is 3.2 kilometers long.

Other notable sites include the Aqueduct of Vanitelli and the Palazzo Vecchio.

The closest airport to the city of Caserta is the Naples Airport (NAP), also known as the Capodichino Airport. It is about a 40 minute train ride from the city center. Airlines that are serviced here include Air Berlin, Air France, Alitalia, British Airways, EasyJet, Air One, Lufthansa Regional, Turkish Airlines and Wizz Air.