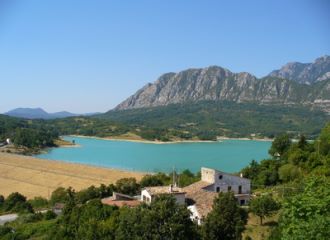 The city of Campobasso is the capital of the Italian region of Molise, located toward the southern end of Italy. It is surrounded by the Matese and Sannio mountains. The city is known for its local production of scamorza (a cow’s milk cheese that bears similarities to mozzarella) and pears. There are 51,255 inhabitants in Campobasso (11/2008) and it covers 55 square kilometers of land.

The primary attraction in the city of Campobasso is the Castello Monforte. It was built around 1450 by Nicola II Monforte over the ruins of a Norman or Lombard building. Right by this castle is the Chiesa della Madonna del Monte. It was first built during the eleventh century but rebuilt in 1525. Villa de Capoa is a very noteworthy garden that is full of statues and numerous plant species, such as cypresses, sequoias, Lebanon Cedars, and Norway Spruces.

The closest airport to the city of Campobasso is the Naples Airport (NAP), also known as the Capodichino Airport. This airport is approximately 81 kilometers from the city. Airlines that are serviced here include Air Berlin, Air France, Alitalia, British Airways, EasyJet, Air One, Lufthansa Regional, Turkish Airlines and Wizz Air.