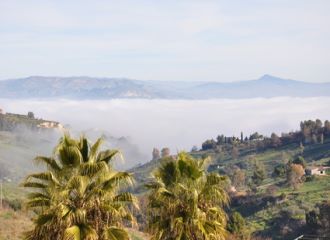 Caltanissetta is a city located in the center of the Italian island of Sicily. It has a population of 60,692 inhabitants (1/2004) and is 416 square kilometers in size. Caltanissetta is known for its small trattorias, small restaurants, that are located within the city’s old quarter. The city is also famous for its Passion Play, which is held on Good Friday. People throughout Sicily come to Caltanissetta to see it.

One of the main attractions is the Cathedral of Santa Maria la Nova, which was erected between 1560 and 1620. Its appearance is late-Renaissance and has characteristics of Baroque style as well. The Castle of Pietrarossa was originally built by the Byzantines between the years 750 to 800. Another interesting site is the Abbey of the Santo Spirito.

The airport closest to Caltanissetta is the Catania-Vincenzo Bellini Airport (CTA). It is approximately 90 kilometers east of the city. It is the busiest airport throughout the island of Sicily and hosts numerous European airlines including British Airways, Lufthansa, Alitalia, EasyJet, Iberia, Luxair, Wizz Air, Wind Jet, and Air Berlin.