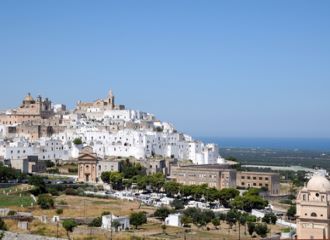 The city of Brindisi is located in the southern Italian region of Apulia and lies along the coast of the Atriatic Sea. The city has 89,846 inhabitants (3/2011) and is 328 square kilometers in size. Throughout history, this city has played a vital role in culture and commerce because of its location as a port city. It is a major port city for trade with the Middle East and Greece.

The Castello Svevo is one of the main attractions in Brindisi. It was built by Emperor Frederick II and is an amazing site to see. The Aragonese Castle, known as the Forte a Mare, was erected in 1491 by King Ferdinand I of Naples. Visitors may also see the symbols of Brindisi – two ancient Roman columns that were used as a port reference for antique mariners.

Brindisi Airport (BDS), also known as Papola Casale Airport is located within close proximity to the city of Brindisi. It services a number of airports, including Air Berlin, EasyJet, Helvetic Airways, and Ryanair.